The White House is the official residence and principal workplace of the President of the United States, located at 1600 Pennsylvania Avenue NW in Washington, D.C.

It has been the residence of every U.S. president since John Adams in 1800, and the term is often used by journalists as a metonym to refer to the acts of the President and his top advisors.

While the President usually operates out of the Oval Office, the White House has a secure underground bunker designed to protect the President and his/her staff in the event of an attack on the White House. It is called the PEOC (Presidential Emergency Operations Center) and located under the East Wing, according to WikiLeaks (on White House Down).

However, in Olympus Has Fallen and White House Down (Die Hard scenario films that focus on terrorists taking over the mansion itself), the building retains severe damage. The building remains intact in all three films, but it is nearly destroyed as a result of gunfire, explosions and car crashes.

In Air Force One, much of the film takes place in the White House situation room and as a result the building remains largely intact. The James S. Brady Press Briefing Room also appears in which impatient journalists have gathered to obtain answers from the Press Secretary regarding the situation of Air Force One over Russia, which has been hijacked by hardline Soviet terrorists.

Outside the South Lawn, many American citizens have gathered in a candlelight vigil praying for the safety of U.S. President James Marshall.

The President is evacuated to the PEOC after a KA posing as a NATO agent leads a suicidal charge against him. In the bunker, Ted Winters reveals himself to be KA and knocks out the president. He then attempts to launch American nuclear missiles into Mecca and Tehran, hoping to inspire a global jihad against the United States. Salt and Winters fight over control of the nukes, with Salt managing to abort the strikes in the last minute before being apprehended by Secret Service agents.

Salt is then taken into custody while Winters is treated by paramedics. Winters tries to kill Salt using a pair of surgical scissors he obtained from a nearby paramedic. Salt sees this and quickly uses her acrobatic skills to break Winter's neck using the handcuff's chains. Salt is then taken to the South Lawn and boards an FBI Helicopter to be taken for interrogation.

It's appearance in the film serves a minor role. The White House has since been repaired two years after the KUF attack on the presidential residence. The President's cabinet monitors the situation in London from the Situation Room with the Vice President Allan Turnbull taking charge in the absence of the POTUS. 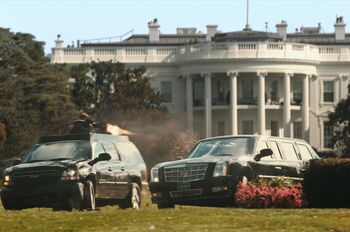 The limos chasing on the largely intact White House lawn in White House Down.
Add a photo to this gallery
Retrieved from "https://die-hard-scenario.fandom.com/wiki/White_House?oldid=30966"
Community content is available under CC-BY-SA unless otherwise noted.