Wesley Snipes (born July 31, 1962) is an American actor, film producer, and martial artist. He is best known for his role as the Marvel Comics title character in the Blade film series. He has starred in various other actioners and dramas such as Major League (with Tom Berenger), King of New York (with Laurence Fishburne and Christopher Walken), The Waterdance, White Men Can't Jump, Boiling Point (with Dennis Hopper, Tobin Bell and Viggo Mortensen), Rising Sun (with Sean Connery and Steve Buscemi), Murder at 1600, Down in the Delta, Disappearing Acts, Antoine Fuqua's Brooklyn's Finest (with Don Cheadle and Ethan Hawke), Game of Death (with Robert Davi) and The Expendables 3 (again with Davi and also with Sylvester Stallone, Harrison Ford, Dolph Lundgren, Jason Statham and Jet Li).

One of Snipe's earliest forays into the Action genre was as determined airline security expert John Cutter in the Die Hard scenario film Passenger 57 as well as a villain with rather anti-hero characteristics in the Phone Booth-inspired film Liberty Stands Still. 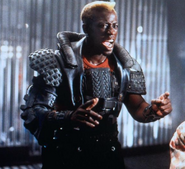 Appearing in Murder at 1600

Appearing in The Marksman

Appearing in The Contractor

Appearing in Game of Death

Appearing in The Expendables 3
Add a photo to this gallery
Retrieved from "https://die-hard-scenario.fandom.com/wiki/Wesley_Snipes?oldid=29140"
Community content is available under CC-BY-SA unless otherwise noted.