Vladimir Kulich (born July 14, 1956) is a Czeck-Canadian actor who has appeared in the Viking films The Thirteenth Warrior and 2011's Ironclad as well as other films like Necromonicon: Book of the Dead (with Bruce Payne, Red Scorpion 2 (with Matt McColm), Breach of Trust (with Michael Biehn), Ground Zero (with Reginald VelJohnson), Silence (with Tony Todd) and Smokin' Aces. Kulich has also done video game voice-overs, had recurring roles on shows such as "Angel" and "Vikings" and guest-starred on shows such as "MacGyver", "The Commish", "Highlander", "The X-Files", "Seven Days" and "Chuck".

Kulich appeared in the Die Hard scenario films such as 1993's Crackerjack, 1998's Firestorm and 2014's The Equalizer. 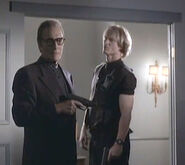 Appearing in '"The Equalizer
Add a photo to this gallery
Retrieved from "https://die-hard-scenario.fandom.com/wiki/Vladimir_Kulich?oldid=29178"
Community content is available under CC-BY-SA unless otherwise noted.