Tony Todd (born December 4, 1954) is an American actor who is best known for his recurring role in the "Star Trek" television spin-offs as Worf's brother Kurn and as the title antagonist in the cult Candyman film franchise.

Todd's other notable film credits include: Sleepwalk, Platoon (with Forest Whitaker, Willem Dafoe and Tom Berenger), Bird (again with Whitaker), Excessive Force (with Lance Henriksen), The Crow (with Henry Kingi and Thomas Rosales Jr.), the trilogy of Black Fox western telefilms, the Final Destination franchise, Wishmaster (with Andrew Divoff), the TV film Babylon 5: A Call to Arms, Shadow: Dead Riot, Hatchet I and II, Sushi Girl (with Jeff Fahey) and is set to be in the independently produced film Star Trek: Axanar.

Todd also had recurring roles on the shows "Jake and the Fatman", "Homicide: Life on the Street", "The District", "Stargate SG-1", "24", the web series "Splatter", "Chuck" (with Arnold Vosloo), "The Event", "Young Justice", "Transformers Prime" and "The Young and the Restless".

Appearing in The Rock 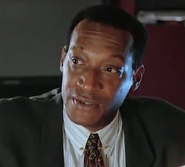 Appearing in The Pandora Project

Appearing in The Eden Formula 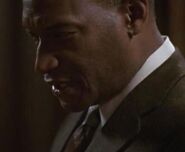 Appearing in a different role on 24

Appearing in Call of Duty: Black Ops II
Add a photo to this gallery
Retrieved from "https://die-hard-scenario.fandom.com/wiki/Tony_Todd?oldid=29408"
Community content is available under CC-BY-SA unless otherwise noted.