The Rock is a 1996 action film. It was released in June 7, 1996. It was directed by Michael Bay. The film written into a story by David Weisberg & Douglas S. Cook & into a screenplay by Weisberg, Cook and Mark Rosner, along with Jonathan Hensleigh and Quentin Tarantino who were both uncredited despite their major contributions to the film's script.

In this film, disenchanted Brigadier General Frank Hummel (Ed Harris) and his group of rogue U.S. Force Recon Marines seized control of Alcatraz Island and threatened to launch rockets loaded with deadly VX poison gas at San Francisco to force the US Government to pay $100 million ransom for themselves and the families of the marines who we're killed under Hummel's command. Teaming up with the Navy SEAL team 1 on the infiltration of Alcatraz is brilliant young FBI chemical weapons specialist Stanley Goodspeed (Nicolas Cage) and mysterious ex-SAS operative now federal prisoner John Mason (Sean Connery), who was secretly the only one who successfully escaped the island prison alive and has the keen knowledge of the island.

The Rock recieved many positive reviews and is thought of as one of the finest Die Hard Scenario films. It is also regarded as Michael Bay's best film and one of the mainly praised films of his.

A group of rogue U.S. Force Recon Marines led by disenchanted Brigadier General Frank Hummel seize a stockpile of deadly VX gas–armed M55 rockets from a heavily guarded US Navy bunker, reluctantly leaving one of their men to die in the process, when a bead of the gas falls and breaks. The next day, Hummel and his men, along with more renegade Marines led by Captains Frye and Darrow, seize control of Alcatraz during a guided tour and take 81 tourists hostage in the prison cells. Hummel threatens to launch the stolen rockets against the population of San Francisco unless the government pays them $100 million from a military slush fund containing money from illegal arms sales, which he will distribute to his troops and the families of Recon Marines who died on clandestine missions under his command and whose deaths were not honored.

The Pentagon and FBI develop a plan to retake the island with a U.S. Navy SEAL team, enlisting the FBI's top chemical weapons specialist, Dr. Stanley Goodspeed, who initially thinks he is to be consulting the team, but soon learns that he has to accompany the SEALs due to his specialization in chemical warfare. Goodspeed's confidence, already shaky as he is a "lab rat" with minimal combat training and experience, is further tested when his fiancée Carla reveals that she is pregnant.

Recognizing that any surface approach will be seen by Hummel's men, FBI director James Womack is forced to turn to federal prisoner John Mason, a 60 year old British national who has been illegally detained for three decades by Womack and his predecessors for reasons which Womack refuses to specify. Mason's usefulness is due to him being the only Alcatraz inmate ever to successfully escape the island, doing so in 1963 through the prison's uncharted underground tunnels.

Although Goodspeed manages to convince Mason to cooperate with the FBI in return for a pardon from the Attorney General, Womack privately reneges on the deal. While in custody at a hotel, Mason takes Womack hostage and then flees. He steals a Hummer H1 and Goodspeed pursues in a commandeered Ferrari F355, resulting in a wild high speed chase through the streets. Mason seeks out his estranged daughter Jade, who is the only proof that he exists. Goodspeed soon arrives with a team to re-arrest Mason and reveals to Jade that he is aiding the FBI. Womack is adamant that Mason should only consult the SEALs, confiding to Special Agent Ernest Paxton that he does not want Mason loose. However, as Mason has committed his route through the tunnels to memory, Womack has no choice but to let him accompany the SEALs.

The team infiltrates Alcatraz through the underground tunnels with Mason's guidance. However, Hummel's Marines are alerted to their presence and ambush them in a shower room. SEAL Commander Anderson refuses to surrender and Captains Frye and Darrow provoke a gunfight, in which all the SEALs are killed, leaving only Mason and Goodspeed alive. Mason sees his chance to escape custody and easily disarms Goodspeed. However, Goodspeed convinces him to help defuse the rockets, since Mason's daughter is also at risk from them. Back on the mainland, Paxton demands to know exactly who Mason is. Womack finally reveals that Mason was a highly-trained British MI6 agent and SAS Captain who stole a microfilm containing details of the US's most closely guarded secrets, including the Roswell UFO incident and the JFK assassination, refused to give it up when captured, and has thus been illegally held prisoner ever since.

Using Mason's knowledge of the prison and proficiency in combat, he and Goodspeed quietly eliminate several small teams of Marines and disable 12 of the 15 rockets. Hummel is so enraged that he threatens over the loudspeaker to execute a hostage if the remaining "Navy SEALs" do not surrender and return the guidance chips from the rockets. Mason surrenders to Hummel, trying to buy Goodspeed some time. Though Goodspeed disables another rocket, the Marines capture him shortly thereafter. With the incursion team lost, the military gives a go ahead to their backup plan: an air strike by F/A-18s with Thermite plasma, which will neutralize the poison gas but also kill everyone on the island including the hostages.

After Mason releases them both from their cells, he explains to Goodspeed why he was held prisoner for so many years and adds that he did not return the microfilm because he knew the FBI would "suicide" him if he did. While Goodspeed and Mason search for the final two rockets, Hummel fires one of them but changes the coordinates at the last moment, causing it to crash harmlessly out to sea. Facing Frye and Darrow's frustration, Hummel explains that their bluff failed and that he is unwilling to harm innocent civilians. He orders them to exit Alcatraz with a few hostages and the remaining VX rockets to cover their retreat, while he'll stay, personally assuming blame. Realizing that they will not be paid their $1 million apiece, Frye, Darrow and Sergeant Crisp mutiny against Hummel and his second-in-command, Major Tom Baxter.

With Mason and Goodspeed watching from afar, Crisp attempts to secure Hummel on Darrow's orders, but Hummel draws his own gun and holds Crisp at gunpoint. Baxter also appears to side against Hummel but then fires at the three rogues. In the ensuing firefight, Crisp and Baxter are killed while Hummel is mortally wounded. Mason drags him away and with his last breath, Hummel tells Goodspeed the location of the final rocket. Darrow and Frye escape and proceed with the plan to fire on San Francisco. While Mason deals with the remaining Marines, Goodspeed seeks out the last rocket. As the jets approach, Darrow is killed when Goodspeed fires the last disarmed rocket into him and he is impaled on a fencepost. Goodspeed stows the last gas pearls from the warhead and takes a loose one, but is then attacked by Frye who begins to strangle Goodspeed to death. Goodspeed shoves the VX gas pearl into Frye's mouth, breaking the pearl and exposing both of them to the gas. Goodspeed injects himself in the heart with atropine as Frye dies from the VX gas. Goodspeed then lights green flares to signal that the threat is over, but only after one of the pilots fires, sending Goodspeed flying into the sea. The early detonation hits the back of the island and harms no one else.

Mason reappears to pull the unconscious Goodspeed to shore. When he recovers, Goodspeed tells Mason that Womack tore up his pardon and informs his superiors that Mason was killed. Goodspeed tells Mason to go to his hotel room, take a change of clothes and $200 he stashed and run. Mason thanks Goodspeed, and gives him a note that holds the location of where he had stashed the microfilm. Womack arrives wanting to see Mason's body, but Goodspeed says it was "vaporized" by the thermite plasma. Some time later, Goodspeed and Carla visit St. Michael's Church in Fort Walton, Kansas and recover the microfilm with a half-century of state secrets, including who actually killed John F. Kennedy. 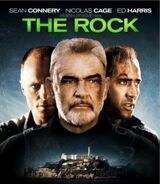 The Rock received generally positive reviews from film critics. The film holds a 66% approval rating on aggregate review site Rotten Tomatoes with an average score of 6.6/10, based on 64 reviews. The sites consensus says "For visceral thrills, it can't be beat. Just don't expect [it] to engage your brain." The film holds a score of 59 out of 100 on Metacritic based on 18 reviews, indicating "mixed or average" reviews. To date, it is Michael Bay's highest rated film on the site and is the only film of his listed on there to have a fresh RT score.

Todd McCarthy of Variety gave the movie a positive review, commenting "The yarn has its share of gaping holes and jaw-dropping improbabilities, but director Michael Bay sweeps them all aside with his never-take-a-breath pacing." Richard Corliss, writing for the Time expresses favorable opinions towards the film, saying "Slick, brutal and almost human, this is the team-spirit action movie Mission: Impossible should have been."

The Rock won a number of minor awards, including 'Best On-Screen Duo' for Connery and Cage at the MTV Movie Awards. It was also nominated for the Academy Award for Best Sound Mixing (Kevin O'Connell, Greg P. Russell and Keith A. Wester). It currently holds a "fresh" rating (67%) on Rotten Tomatoes based on 48 reviews, making it Michael Bay's highest rated film and his only film labeled as "fresh".

The film was selected for a limited edition DVD release by the Criterion Collection, a distributor of primarily arthouse films it categorizes as "important classic and contemporary films" and "cinema at its finest". In an essay supporting the selection of The Rock, Roger Ebert, who was strongly critical of most of Bay's later films, gave the film a 3 1/2 out of four stars, calling it "an action picture that rises to the top of the genre because of a literate, witty screenplay and skilled craftsmanship in the direction and special effects."

In 2003, the film was remade in Bollywood as Qayamat: City Under Threat. That film also ended up ripping off Crimson Tide and Air Force One.

In 2014, Time Out polled several film critics, directors, actors and stunt actors to list their top action films. This film was listed at 74th place on that list.

Retrieved from "https://die-hard-scenario.fandom.com/wiki/The_Rock?oldid=32424"
Community content is available under CC-BY-SA unless otherwise noted.