Steven Seagal (born April 10, 1952) is an American actor and martial artist who specializes in action films.

In the 1990's, he appeared in a number of successful theatrical action films, such as Above the Law and Hard to Kill, but in more recent years his filmography has become almost entirely direct-to-DVD releases such as The Foreigner (with Deobia Oparei). Seagal has appeared in several different Die Hard scenario films.

Seagal began his descent into this genre with the 1992 film Under Siege (with Tommy Lee Jones) and continued in the 1995 film Under Siege 2: Dark Territory, in both of which he played Casey Ryback. In 1996 he appeared in Executive Decision as Austin Travis, a supporting character who dies less than halfway through the film. He returned to the sub-genre in 2002's Half Past Dead, playing Sasha Petrosevitch and reuniting him with his Under Siege 2 co-star Morris Chestnut. After moving onto the direct-to-DVD portion of his career, Seagal appeared in Submerged as Chris Cody, Flight of Fury as John Sands, and in Maximum Conviction as Cross, opposite Steve Austin.

Appearing in Hard to Kill

Appearing in Marked for Death

Appearing in Out for Justice 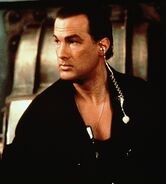 Appearing in Under Siege

Appearing in On Deadly Ground 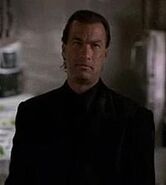 Appearing in Under Siege 2

Appearing in Fire Down Below

Appearing in Half Past Dead

Appearing in Flight of Fury

Appearing in Against the Dark

Appearing in Driven to Kill

Appearing in The Keeper

Appearing in Sniper: Special Ops
Add a photo to this gallery
Retrieved from "https://die-hard-scenario.fandom.com/wiki/Steven_Seagal?oldid=32451"
Community content is available under CC-BY-SA unless otherwise noted.