Sean Bean (born April 17, 1959) is a British actor who has appeared in film and television franchises such as the first Pierce Brosnan James Bond entry GoldenEye, the Lord of the Rings trilogy (with Karl Urban and Sean Astin), "Richard Sharpe" series (with Alice Krige), Silent Hill films (with Radha Mitchell and Carrie-Anne Moss), the first season of "Game of Thrones" (which later had Lena Headey, Alexander Siddig and Deobia Oparei as series regulars) and the hit 2014 TNT cable series "Legends" (with Steve Harris). 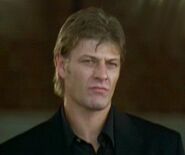 Appearing in Don't Say a Word

Appearing in Soldiers of Fortune

Appearing on Legends
Add a photo to this gallery
Retrieved from "https://die-hard-scenario.fandom.com/wiki/Sean_Bean?oldid=28890"
Community content is available under CC-BY-SA unless otherwise noted.