Rick Avery has been an acclaimed stunt man, director, helicopter pilot, second-unit director and stunt coordinator on over 500 motion pictures and television shows. He also heads a Kempo Karate academy and is heavily involved with various charity fundraisers. His family is very involved in the film industry as well and has worked on-screen with the likes of Dennis Hopper, Robert De Niro, Willem Dafoe, John Travolta, Sylvester Stallone, Chuck Norris, Gary Busey, Al Leong, Peter Weller and several other talents. He has worked with filmmakers such as John Woo, Jonathan Frakes, Sam Raimi and Christopher Nolan. 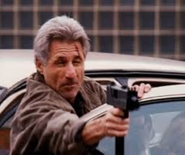 Appearing in The Cutter
Add a photo to this gallery
Retrieved from "https://die-hard-scenario.fandom.com/wiki/Rick_Avery?oldid=30378"
Community content is available under CC-BY-SA unless otherwise noted.