Raymond Cruz (born July 9, 1961) is a actor reknown for his role as Detective Julio Sanchez on the acclaimed cable TV series "The Closer" and it's spin-off "Major Crimes". He also made recurring guest appearances on the shows "Harsh Realm" (with Glenn Morshower, "My Name is Earl", "Breaking Bad" and the web-series "Lauren".

Cruz has appeared in films such as Out for Justice (with Steven Seagal and William Forsythe), Blood In, Blood Out (with Danny Trejo and Ving Rhames), Clear and Present Danger (with Harrison Ford and Willem Dafoe), The Substitute (with Tom Berenger, Ernie Hudson and again with Forsythe), Alien: Resurrection, From Dusk Till Dawn 2: Texas Blood Money (with Robert Patrick), Training Day (with Denzel Washington, Ethan Hawke and Noel Gugliemi) and Brothers in Arms (with Peter Greene).

Appearing in Gremlins 2: The New Batch

Appearing in Under Siege

Appearing in The Rock 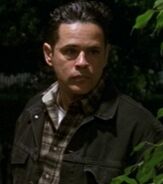 Appearing in My Name is Modesty
Add a photo to this gallery
Retrieved from "https://die-hard-scenario.fandom.com/wiki/Raymond_Cruz?oldid=29180"
Community content is available under CC-BY-SA unless otherwise noted.