Paul Giamatti (born June 6, 1967) is an American character actor who began his career as a supporting actor in several films produced during the 1990s including Private Parts, The Truman Show, Saving Private Ryan, The Negotiator, and Man on the Moon, before earning lead roles in several projects in the 2000s such as American Splendor, Sideways, Cinderella Man, The Illusionist, "John Adams", Cold Souls, Barney's Version and Win Win. Additional credits include: Doctor Doolittle (with Eddie Murphy), The Hawk is Dying, Lady in the Water, Shoot Em' Up, Ironclad (with Vladimir Kulich), Cosmopolis, The Amazing Spider-Man 2 (with Michael Massee) and San Andreas.

Appearing in The Negotiator 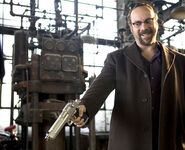 Appearing in Shoot Em' Up

Appearing in San Andreas
Add a photo to this gallery
Retrieved from "https://die-hard-scenario.fandom.com/wiki/Paul_Giamatti?oldid=25246"
Community content is available under CC-BY-SA unless otherwise noted.