Marcus Aurelius is an actor who, in addition to guest-starring on various crime procedural shows and playing a police officer in the 1998 comic book adaptation Blade (with Wesley Snipes) has often been seen in various low-budget or B-movie productions. He appeared in the Die Hard scenario films Bloodfist VI: Ground Zero, Strategic Command (A.K.A. Executive Command) and Black Thunder. In the former, he played on of the various Islamic villains while in the latter two films, he played one of the main heroes assisting main protagonist Michael Dudikoff. 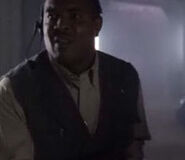 Appearing in Dragon Fighter
Add a photo to this gallery
Retrieved from "https://die-hard-scenario.fandom.com/wiki/Marcus_Aurelius?oldid=25447"
Community content is available under CC-BY-SA unless otherwise noted.