Lance Reddick (born 1962) is an American character actor best recognized for playing undercover detective Johnny Basil on "Oz", Cedric Daniels on "The Wire", Matthew Abaddon on "Lost" and Phillip Broyles on "Fringe". Reddick has also appeared in films such as Don't Say a Word (with Sean Bean), The Way of War (with Cuba Gooding Jr.), Jonah Hex (with John Malkovich), Won't Back Down (with Ving Rhames), the 2013 remake of Oldboy, The Guest, Faults (with Mary Elizabeth Winstead) and John Wick (with Keanu Reeves and Willem Dafoe).

Appearing in The Siege 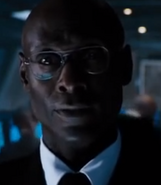 Appearing in White House Down

Appearing in John Wick
Add a photo to this gallery
Retrieved from "https://die-hard-scenario.fandom.com/wiki/Lance_Reddick?oldid=32050"
Community content is available under CC-BY-SA unless otherwise noted.