Jet Li (born April 26, 1963) is a Chinese film actor, film producer, martial artist, and Wushu champion who was born in Beijing. He is a naturalised Singaporean citizen with over 40 motion pictures to his credit including the Shaolin Temple, Once Upon a Time in China and The Expendables (the latter with Sylvester Stallone, Arnold Schwarzenegger, Dolph Lundgren and Bruce Willis) franchises, The Tai-Chi Master, Fist of Legend, the Die Hard scenario film High Risk (known in the States as Meltdown), Black Mask (with Lau-Ching Wan), Lethal Weapon 4 (with Mel Gibson, Danny Glover, James Lew and Al Leong), Luc Besson's Kiss of the Dragon, Hero, Unleashed (with Morgan Freeman), Fearless (with Michelle Yeoh), The Warlords and The Forbidden Kingdom (with Jackie Chan).

Appearing in Cradle 2 the Grave

Appearing in Rise to Honor 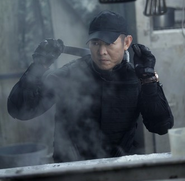 Appearing in Badges of Fury

Appearing in The Expendables 3
Add a photo to this gallery
Retrieved from "https://die-hard-scenario.fandom.com/wiki/Jet_Li?oldid=29414"
Community content is available under CC-BY-SA unless otherwise noted.