Jeff Imada (born on June 17, 1955) is a marital artist, stuntman, actor and 2nd unit director. He has performed stunts in over 100 films and television programs and he authored two books on the Balisong knife, one of which was called The Balisong Manual, and it was one of the first books about the balisong knife to be published in the United States.

Jeff Imada began studying martial arts in 1970 at the age of fifteen. A close friend of Brandon Lee’s, the two studied Jeet Kune Do under former Bruce Lee student Dan Inosanto. In the early 1990’s Jeff was the primary fight choreographer in Brandon Lee’s movie, The Crow. Jeff is also a very accomplished martial artist in Filipino Martial Arts (FMA) and has studied Tae Kwon Do, Karate, Kendo, Boxing, and fencing. Besides the martial arts, Jeff is a dancer, gymnists, skier and horseback rider. His stuntwork includes fighting, falling, and driving. Jeff Imada attended El Camino College and UCLA, majoring in pre-med with a minor in music. It was during college that he began working as a movie “extra”. This led to his membership in the Screen Actors Guild, Stunts Unlimited and the Directors Guild of America. He became reknown for his work as a stunt coordinator on John Carpenter's films and for designing and choreographing the fight scenes of Fight Club, the The Bourne Identity films and The Book of Eli. He can often be spotted portraying various henchmen in many movies headlined by the likes of either Steven Seagal or Mel Gibson. 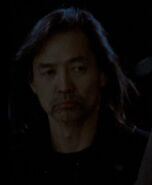 Appearing on 24
Add a photo to this gallery
Retrieved from "https://die-hard-scenario.fandom.com/wiki/Jeff_Imada?oldid=28763"
Community content is available under CC-BY-SA unless otherwise noted.