Jürgen Prochnow (born June 10, 1941) is a German actor best known for his roles in films such as Wolfgang Petersen's Das Boot, Dune and Beverly Hills Cop II (with Eddie Murphy). He has also had supporting roles in films such as The Keep, A Dry White Season, Body of Evidence (with Willem Dafoe), Judge Dredd (with Sylvester Stallone and which was later rebooted in 2012 as Dredd with Karl Urban and Lena Headey), The English Patient (again with Dafoe), The Replacement Killers (with Chow Yun-Fat, Patrick Kilpatrick, Carlos Gomez, Michael Rooker and Al Leong), Wing Commander, Ripper: Letter from Hell (with Bruce Payne), Beerfest, The Da Vinci Code and Sinners and Saints (with Sean Patrick Flannery, Kim Coates and Tom Berenger). He also provided a voice-over for the 2008 video game Dark Sector and made recurring guest appearances on the hit television shows "24" and "NCIS: Los Angeles". 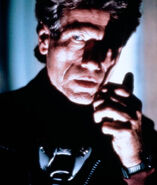 Appearing on 24
Add a photo to this gallery
Retrieved from "https://die-hard-scenario.fandom.com/wiki/J%C3%BCrgen_Prochnow?oldid=29590"
Community content is available under CC-BY-SA unless otherwise noted.