Harrison Ford (born July 13, 1942) is an American film actor and producer. He is famous for his performances as Han Solo in the original Star Wars trilogy (as well as it's sequel trilogy) and the title character of the Indiana Jones film series. Ford portrayed President James Marshall in Air Force One.

Ford appeared in numerous films for many years, such as American Graffiti, The Conversation (with Gene Hackman), Force 10 from Navarone (with Carl Weathers), Apocalypse Now (with Dennis Hopper), Blade Runner (with Rutger Hauer and Jeff Imada), Witness (with Viggo Mortensen and Timothy Carhart), The Mosquito Coast, Working Girl (again with Carhart and with Jeffrey Nordling), Presumed Innocent, Regarding Henry (with John Leguizamo), The Fugitive (with Tommy Lee Jones and Joe Pantoliano), The Devil's Own, What Lies Beneath, K-19: The Widowmaker (with Liam Neeson, Sam Spruell and Ravil Isyanov), Firewall, Cowboys & Aliens and 42. He also portrayed Jack Ryan in the Tom Clancy adaptations Patriot Games (with Sean Bean) and Clear and Present Danger (with Benjamin Bratt and Willem Dafoe). Ford has appeared alongside Sylvester Stallone, Wesley Snipes, Jason Statham, Jet Li, Randy Couture, Arnold Schwarzenegger and Dolph Lundgren. among others, in The Expendables 3, released at the U.S. in August 15, 2014.

Appearing in The Fugitive

Appearing in Clear and Present Danger

Appearing in The Devil's Own 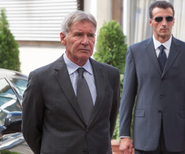 Appearing in The Expendables 3
Add a photo to this gallery

Retrieved from "https://die-hard-scenario.fandom.com/wiki/Harrison_Ford?oldid=31155"
Community content is available under CC-BY-SA unless otherwise noted.