Eric Roberts (born April 18, 1956) is a Golden-Globe nominated actor who has starred in over 300 motion pictures and television shows. He is best known for being the older brother of acclaimed actress Julia Roberts and for his roles in films such as The Pope of Greenwich Village, Runaway Train (with Danny Trejo and Jon Voight), the first two Best of the Best films (with Simon Rhee), National Security, The Dark Knight (with Christian Bale, Morgan Freeman and Gary Oldman), The Expendables (with Sylvester Stallone, Bruce Willis, Jet Li and Dolph Lundgren), Lovelace and Inherent Vice.

Roberts appeared in the Die Hard scenario films Heaven's Fire and The Alternate as the lead hero and in Christmas Rush (A.K.A. Breakaway) and Depth Charge as the lead villain. He is set to star in another Die Hard/The Hunt for Red October clone titled Rogue Strike. He also had a supporting role in 2005's Final Approach.

Appearing in Race Against Time

Appearing in The Alternate 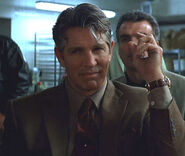 Appearing in The Dark Knight 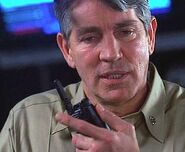 Appearing in Hunt to Kill

Appearing in Rogue Strike
Add a photo to this gallery
Retrieved from "https://die-hard-scenario.fandom.com/wiki/Eric_Roberts?oldid=29161"
Community content is available under CC-BY-SA unless otherwise noted.