Elisha Cuthbert (born November 30, 1982) was born in Calgary, Canada to Kevin and Patricia Cuthbert. Her career began in 1989 at the age of seven by becoming a model. She grew up in Longueuil, Quebec, near Montreal, and is fluent in French.

When she was fifteen, Cuthbert was one of the hosts of Popular Mechanics for Kids. She later appeared as a regular on "Are You Afraid of the Dark?". Cuthbert graduated from Centennial Regional High School in Greenfield Park, Quebec in 2000 and moved to Los Angeles, California shortly afterwards. Soon after her move to Hollywood, she was cast as Kim Bauer, daughter of federal agent Jack Bauer in the first season of television series "24".

Cuthbert also began her Hollywood film career with small roles in Old School and Love Actually (with Alan Rickman and Liam Neeson), but her break came with The Girl Next Door, in which she was cast as an ex-porn star, Danielle. Cuthbert had initial reservations about taking the part, but was persuaded by director Luke Greenfield into accepting.

She has appeared on the comedy show "Happy Endings", which ran for two seasons and was part of the three leads on the short-lived NBC sitcom "One Big Happy". 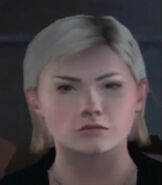 Appearing in 24 The Game
Add a photo to this gallery
Retrieved from "https://die-hard-scenario.fandom.com/wiki/Elisha_Cuthbert?oldid=26416"
Community content is available under CC-BY-SA unless otherwise noted.