Dorian Harewood (born August 6, 1950) is an American actor who has done several voice-overs for countless cartoons and video games and is best known for his title role in the telefilm The Jesse Owens Story and the acclaimed mini-series sequel "Roots: The Next Generation". Harewood also had recurring roles on shows such as "Strike Force", "Trauma Center", "Viper", "Stargate SG-1", "Boomtown" and "Terminator: The Sarah Connor Chronicles" (with Lena Headey).

Harewood also had supporting roles in films such as Against All Odds, Full Metal Jacket, Space Jam, the 1997 television remake of 12 Angry Men, Glitter (which was directed by Vondie Curtis-Hall), Gothika (with Halle Berry) and Mayor Cupcake.

Harewood appeared in the Die Hard scenario films Sudden Death and Evasive Action as well as the 2005 remake of Assault on Precinct 13. 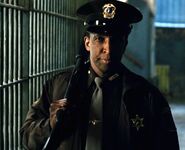 Appearing in Assault on Precinct 13
Add a photo to this gallery
Retrieved from "https://die-hard-scenario.fandom.com/wiki/Dorian_Harewood?oldid=25519"
Community content is available under CC-BY-SA unless otherwise noted.