Colonel Stuart is almost unanimously regarded as the craziest of all the Die Hard terrorists. He would practice martial arts moves nude every morning furiously and would eventually crash an entire plane full of innocent people just to prove a point. Stuart is the coldest and most unpredictable of all the main antagonists in the whole series, aside from Hans Gruber.

He was portrayed by William Sadler.

Colonel Stuart was a martial arts expert and U.S Special Forces commander that was trained by Major Grant, and a brilliant military strategist. He was a strong supporter of General Ramon Esperanza, due to his strong anti-communist beliefs, funding him even when Congress put a stop to it. When Congress learned that Stuart continued to fund Esperanza, Stuart was removed from his command and sent into exile.

Stuart was practicing his martial arts skills while completely naked in the hotel near Dulles International Airport where General Esperanza will be taken from Val Verde to the US to stand trial. He and the former members of his unit start their operation free Esperanza from justice by take over the Dulles International Airport. Col. Stuart accidentally bumps into hero cop John McClane in the airport, as they thought they recognized each other, but unable to figure it out.

At the airport terminal, Stuart's first lieutenant, Garber met up with him and informs him that they have a problem with personal due to the last minute replacement. After being asked about the security around the airport, Stuart tells Garber the security around the airport is a joke, as they expected. Then reporter Samantha Coleman came in and asked for questions. Stuart gives her a "Fuck and You" comment as Garber blocks the camera and walked away.

Later, Stuart met up with many members of their former unit as they are setting up the makeshift airport equipment at the Hidey Lake Community Church out by the airport. Once Miller returns alone, he informs Stuart that a cop killed Cochrane, but has completed their mission, planting a scrambling device on the luggage area. Stuart says that their damage is minimal, but the penalty is severe and points his pistol at Miller's head and fires, which the chamber of the gun was empty, sparing Miller. The colonel says to his man that if he fails again, the chamber won't be empty this time.

After Burke calls Stuart on the encoded radio that the generator that powers their makeshift airport equipment is operational, he tells his men to fire up their equipment. They shut down Dulles towers landing systems and instruments, rending the planes above them unable to land due the deadly snowstorm. Stuart calls Dulles tower and reveals that he's the one who took control of their systems while being careful not to reveal his name. He tells Trudeau, chief of IAD air operations, that the plane transporting Esperanza, Foreign Military One, will be landing at the airport in 58 minutes. Stuart announced the plane will land in the runway of his destination and it will remain isolated and not to be approached. He also demands the 747 cargo conversion plane fully fueled and placed in his disposal. Stuart warns the tower that any attempt to restore their systems will be met with severe consequences and hangs up.

At the church, when Garber was unable to get a reply from O'Reilly and his men at the annex skywalk near the antenna array that was just bombed by them, Kahn comes down from the choir loft and informs Stuart that their people killed the SWAT team near the skywalk from the intercepted call from IAD chief of communications Leslie Barnes. Outraged that his men are also killed, Stuart calls Dulles Tower that they are going to pay the penalty. McClane contacts him through Barnes tie-in phone to try to convince him that the death of five airport officers is penalty enough. The airport police captain, Carmine Lorenzo, rudely berates McClane, which allows Stuart to know his enemy. Stuart reveals his intentions of rescuing Esperanza to McClane and tells him to witness what he's going to do.

He asks the systems technical expert, Thompson, for a flight that's low on fuel. Thompson finds Windsor 114, which was flying transatlantic from London. He has Thompson to recalibrate the sea level minus 200 feet so that the plane can't see the runway due to the blizzard. He uses a high-pitched voice to pose as a Dulles approach controller as he tells the pilots to land in runway 29. Afterwards, he came back to his normal voice as Dulles tower and tells Windsor 114 he's clear to land. As the plane flown into the concrete, he hears the pilots' screams as he mercilessly looks on and taunts them that he's got them. After the crash, Stuart calls Dulles Tower and again requests the 747 to ready on time and General Esperanza's plane arrived unapproached to avoid any further penalties. After Garber reveals that everything is done as they anticipated, Stuart watches reporter Sam Coleman's report of his own plane crash. He crumbles the slip of information on the Windsor flight he crashed.

As Stuart was making the announcement to his men, Thompson finds that General Esperanza's plane as arrived in Dulles airspace. Stuart calls Dulles tower that don't attempt to land any planes since they going to light up the runway for Esperanza. Stuart again poses a Dulles Tower and contacts Foreign Military One. He tells the pilots on to land on runway 15. Then he heard the sound of gunfire on the plane and checks on the airport radio, but doesn't get an response. Then Esperanza calls them on the encoded radio on the mayday call. Stuart discards the airport radio and takes Garber's radio as he speaks to Esperanza. The dictator says he lost cabin pressure and is near zero visibility. He requests to land the accessible since he can't land in runway 15. Stuart gets him to land on runway 25R and has Thompson changed runway lights. Relieved that Esperanza will be landing safely, Stuart heads for the runway with Garber, Thompson and Kahn. As he and his men see McClane taking Esperanza at gunpoint, they opened fired at him. Although McClane killed Thompson, Stuart and his men have McClane pinned in the cockpit. Stuart mocks McClane that his death will be considered a military funeral and he and his men fired at the cockpit. Then they tossed grenades in the cockpit and cleared away as the plane explodes. Stuart and the others see McClane ejected safely. But they saw the fire trucks about to arrive and went back to the church. As Burke was patching up Esperanza's grazed shoulder wound, Stuart tells him that their escape will be ready within 30 minutes. Then the trip wire alarm sounded, Garber tells him that Army Special Forces are coming in from all sides of the church. Knowing well it was Major Grant and his men, they set their magazines to blanks and staged a fake firefight to keep up appearances as his men are planting C4 explosives at the airport equipment. He escapes at the back of the church with Esperanza, Garber, Miller, Kahn and Burke at snowmobiles. After McClane kills Burke and Garber, Stuart sees him driving Garber's snowmobile and has Miller take him on as he and Kahn parked their snowmobiles. Knowing McClane is carrying blanks in Garber's machine gun, he switch his magazines to real bullets. Then he and his men fired at the snowmobile and it explodes. Thinking that they finally killed their adversary, they head out.

Stuart calls Dulles tower and learns that the 747 is at Hanger 11, the most remote hanger that the airport have. After Stuart tells to confirm the condition of the plane, Grant calls in, pretending to be an enemy and silently tells him to he and his men will meet in the plane. After arriving in Hanger 11, Grant calls Stuart on the encoded radio and they are on the way. Once Grant and his team arrived in Hanger 11, he and Esperanza met up with Grant. Stuart congratulates all of his men for their victory before going onboard the 747.

Before they can take off, McClane, who survived the snowmobile chase, jumps onto their getaway plane's left wing and forcibly blocks the ailerons, making the plane unable to take off. Stuart and Grant go out to the wing to kill McClane. McClane kills Grant by pushing him into an engine, but Stuart manages to kick McClane off the plane, but not before McClane grabs onto the fuel tank and rips it open, creating a long jet fuel trail that melts through the snow on the runway. Stuart removed the fire jacket off the ailerons and went back inside the plane. When he, General Esperanza, and the last of his remaining men are preparing to take off and escape to the tropics, McClane pulls out his cigarette lighter and ignites the fuel trail. The flames shoot up the leak on the aircraft just as it lifts off of the runway, and Stuart and all of his men are incinerated in the resulting explosion.

Colonel Stuart is the most ruthless villain in the series. He is a military man who will go to any lengths, no matter how cruel to accomplish his mission. The prime example of this, happens when he punishes the airport by crashing the Windsor 114. Stuart is even shown to be quite cold when it comes to leading his team of mercenaries. When Miller mentions that Cochrane was killed while they were wiring the luggage bay, Stuart threatens to kill him if he fails again. Despite this factor, later on in the film (after Esperanza has been rescued) Stuart becomes more flippant in his actions; being more pleasant to his accomplices and smiling sadistically when firing upon McClane. Stuart is a right-wing zealot who hates communism so much he will kill innocent people to support his cause of destroying communism in the world. Stuart is also the only main antagonist to be a match for McClane on a physical level as well as intelligence. He is also the only main antagonist to not attempt to kill McClane when confronting him at the end. 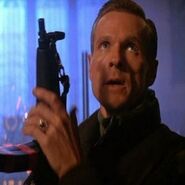 Add a photo to this gallery
Retrieved from "https://die-hard-scenario.fandom.com/wiki/Colonel_Stuart?oldid=31871"
Community content is available under CC-BY-SA unless otherwise noted.