Clive Owen (born October 3, 1964) is an English actor who first gained recognition in the United Kingdom for playing the lead role in the ITV series "Chancer" from 1990 to 1991. He then received critical acclaim for his work in the film Close My Eyes (1991) before getting international notice for his performance as a struggling writer in Croupier (1998). In 2005, he won a Golden Globe and a BAFTA Award and was nominated for an Academy Award for Best Supporting Actor for his appearance in the drama Closer (2004). Additional film credits include: Greenfingers, Beyond Borders (with Angelina Jolie), 2004's King Arthur, Sin City (with Bruce Willis, Michael Madsen and Rosario Dawson) and Children of Men as well as television series like "Second Sight" and "The Knick". 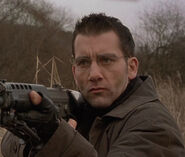 Appearing in The Bourne Identity

Appearing in Inside Man

Appearing in Shoot Em' Up

Appearing in The International
Add a photo to this gallery
Retrieved from "https://die-hard-scenario.fandom.com/wiki/Clive_Owen?oldid=20299"
Community content is available under CC-BY-SA unless otherwise noted.