Bruce Payne (born November 22, 1958) is a well-known character actor best known for his villainous roles in films such as the Dungeons & Dragons film franchise, Highlander: Endgame (with Peter Wingfield and Christopher Lambert) and Vendetta. He also appeared in a recurring character arc on the TV series "La Femme Nikita" (with Carlo Rota). He was once dubbed as part of the young British actors known as "the Brit Pack", which also included the likes of actors such as Gary Oldman.

Payne's Die Hard scenario credits include his villainous turn in Passenger 57 and his ally role in the film sequel No Contest II: Face the Evil. 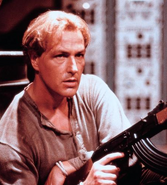 Appearing in No Contest II 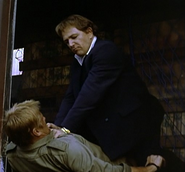 Appearing in Getaway
Add a photo to this gallery
Retrieved from "https://die-hard-scenario.fandom.com/wiki/Bruce_Payne?oldid=29547"
Community content is available under CC-BY-SA unless otherwise noted.