Arnold Schwarzenegger (born July 30, 1947) is an Austrian-born American actor, bodybuilder and former politician. He was once part of the Planet Hollywood trio with Sylvester Stallone and Bruce Willis and has since gone on to appeared in various films with the two.

Schwarzenegger was born in Thal, Austria, a village bordering the Styrian capital Graz, and was christened Arnold Alois Schwarzenegger. His parents were the local police chief, Gustav Schwarzenegger (17 August 1907–13 December 1972), and Aurelia (née Jadrny; 29 July 1922–2 August 1998). Gustav served in World War II, after he voluntarily applied to join the Nazi Party in 1938. Gustav served with the German Army as a Hauptfeldwebel of the Feldgendarmerie and was discharged in 1943 after contracting malaria. They were married on October 20, 1945 – Gustav was 38, and Aurelia was 23-years-old. According to Schwarzenegger, both of his parents were very strict: "Back then in Austria it was a very different world, if we did something bad or we disobeyed our parents, the rod was not spared." He grew up in a Roman Catholic family who attended Mass every Sunday.

Gustav had a preference for his older son, Meinhard (17 July 1946–20 May 1971), over Arnold. His favoritism was "strong and blatant," which stemmed from unfounded suspicion that Arnold was not his biological child. Schwarzenegger has said his father had "no patience for listening or understanding your problems." Schwarzenegger had a good relationship with his mother and kept in touch with her until her death. In later life, Schwarzenegger commissioned the Simon Wiesenthal Center to research his father's wartime record, which came up with no evidence of Gustav's being involved in atrocities, despite Gustav's membership in the Nazi Party and SA. Schwarzenegger's father's background received wide press attention during the 2003 California recall campaign. At school, Schwarzenegger was apparently in the middle but stood out for his "cheerful, good-humored and exuberant" character. Money was a problem in their household; Schwarzenegger recalled that one of the highlights of his youth was when the family bought a refrigerator.

As a boy, Schwarzenegger played several sports, heavily influenced by his father. He picked up his first barbell in 1960, when his soccer coach took his team to a local gym. At the age of 14, he chose bodybuilding over soccer as a career. Schwarzenegger has responded to a question asking if he was 13 when he started weightlifting: "I actually started weight training when I was 15, but I'd been participating in sports, like soccer, for years, so I felt that although I was slim, I was well-developed, at least enough so that I could start going to the gym and start Olympic lifting." However, his official website biography claims: "At 14, he started an intensive training program with Dan Farmer, studied psychology at 15 (to learn more about the power of mind over body) and at 17, officially started his competitive career." During a speech in 2001, he said, "My own plan formed when I was 14 years old. My father had wanted me to be a police officer like he was. My mother wanted me to go to trade school." Schwarzenegger took to visiting a gym in Graz, where he also frequented the local movie theaters to see bodybuilding idols such as Reg Park, Steve Reeves, and Johnny Weissmuller on the big screen. When Reeves died in 2000, Schwarzenegger fondly remembered him: "As a teenager, I grew up with Steve Reeves. His remarkable accomplishments allowed me a sense of what was possible, when others around me didn't always understand my dreams. Steve Reeves has been part of everything I've ever been fortunate enough to achieve."

In 1961, Schwarzenegger met former Mr. Austria Kurt Marnul, who invited him to train at the gym in Graz. He was so dedicated as a youngster that he broke into the local gym on weekends, when it was usually closed, so that he could train. "It would make me sick to miss a workout... I knew I couldn't look at myself in the mirror the next morning if I didn't do it." When Schwarzenegger was asked about his first movie experience as a boy, he replied: "I was very young, but I remember my father taking me to the Austrian theaters and seeing some newsreels. The first real movie I saw, that I distinctly remember, was a John Wayne movie."

On 20 May 1971, his brother, Meinhard, died in a car accident. Meinhard had been drinking and was killed instantly. Schwarzenegger did not attend his funeral. Meinhard was due to marry Erika Knapp, and the couple had a three-year-old son, Patrick. Schwarzenegger would pay for Patrick's education and help him to immigrate to the United States. Gustav died the following year from a stroke. In Pumping Iron, Schwarzenegger claimed that he did not attend his father's funeral because he was training for a body building contest. Later, he and the film's producer said this story was taken from another body builder for the purpose of showing the extremes that some would go to for their sport and to make Schwarzenegger's image more cold and machine-like in order to fan controversy for the film. Barbara Baker, his first serious girlfriend, has said he informed her of his father's death without emotion and that he never spoke of his brother. Over time, he has given at least three versions of why he was absent from his father's funeral.

In an interview with Fortune in 2004, Schwarzenegger told how he suffered what "would now be called child abuse" at the hands of his father: "My hair was pulled. I was hit with belts. So was the kid next door. It was just the way it was. Many of the children I've seen were broken by their parents, which was the German-Austrian mentality. They didn't want to create an individual. It was all about conforming. I was one who did not conform, and whose will could not be broken. Therefore, I became a rebel. Every time I got hit, and every time someone said, 'you can't do this,' I said, 'this is not going to be for much longer, because I'm going to move out of here. I want to be rich. I want to be somebody."

Schwarzenegger wanted to move from bodybuilding into acting, finally achieving it when he was chosen to play the role of Hercules in 1970's Hercules in New York. Credited under the name "Arnold Strong," his accent in the film was so thick that his lines were dubbed after production. His second film appearance was as a deaf mute hit-man for the mob in director Robert Altman's The Long Goodbye (1973), which was followed by a much more significant part in the film Stay Hungry (1976), for which he was awarded a Golden Globe for New Male Star of the Year. Schwarzenegger has discussed his early struggles in developing his acting career. "It was very difficult for me in the beginning – I was told by agents and casting people that my body was 'too weird', that I had a funny accent, and that my name was too long. You name it, and they told me I had to change it. Basically, everywhere I turned, I was told that I had no chance."

Schwarzenegger drew attention and boosted his profile in the bodybuilding film Pumping Iron (1977), elements of which were dramatized. In 1991, Schwarzenegger purchased the rights to the film, its outtakes, and associated still photography. Schwarzenegger auditioned for the title role of "The Incredible Hulk", but did not win the role because of his height. Later, Lou Ferrigno got the part of Dr. David Banner's alter ego. Schwarzenegger appeared with Kirk Douglas and Ann-Margret in the 1979 comedy The Villain. In 1980 he starred in a biographical film of the 1950s actress Jayne Mansfield as Mansfield's husband, Mickey Hargitay.

Appearing in The Rundown 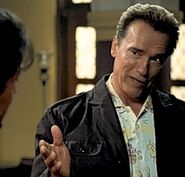 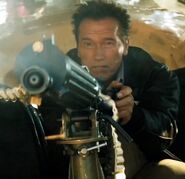 Appearing in The Last Stand

Appearing in The Expendables 3

Appearing in Terminator: Genisys
Add a photo to this gallery
Retrieved from "https://die-hard-scenario.fandom.com/wiki/Arnold_Schwarzenegger?oldid=28984"
Community content is available under CC-BY-SA unless otherwise noted.