Alan Rickman (born February 21 1946; passed away January 14, 2016) is an internationally reknown actor, made famous by his role in the original Die Hard, as the villain, Hans Gruber. His mysterious and complex performance was praised and is now one of his most popular roles.

Ironically, at one point his voice was regarded as the perfect male voice, along with actor Jeremy Irons. The two would later play brothers in the Die Hard film series.

He is also well known for playing Severus Snape in the Harry Potter film series.

Rickman also portrayed the Sheriff of Nottingham in Robin Hood: Prince of Thieves (with Morgan Freeman) and the historical figure Éamon de Valera in Michael Collins (with Liam Neeson). He also appeared in Quigley Down Under, Truly Madly Deeply, Sense and Sensibility, Rasputin (where he got awards, nominations and praise as the title character), Judas Kiss, Dogma, Galaxy Quest, Blow Dry, Love Actually (again with Neeson), Something the Lord Made, Bottle Shock, Lee Daniel's The Butler (with Forest Whitaker and Cuba Gooding Jr.) and CBGB. 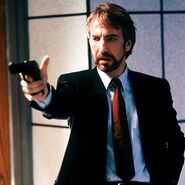 Appearing in Galaxy Quest
Add a photo to this gallery

Retrieved from "https://die-hard-scenario.fandom.com/wiki/Alan_Rickman?oldid=28530"
Community content is available under CC-BY-SA unless otherwise noted.